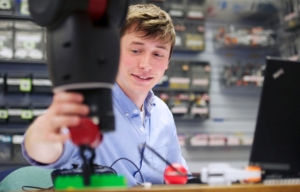 Say ‘robot’ and images of Rosie, or the Terminator, or R2D2 come to mind. Star Wars meets The Jetsons. Today’s reality, however, looks more like a fleet of industrially colored robots purchased by car makers to weld and assemble vehicles and move heavy metal.

But this reality is changing. Fast. Robots are smarter than ever before, safe enough to work among humans, and can perform physical tasks once considered impossible.

So, what does it mean to have robots among us? Advances in technology are paving the way for a new breed of robot that delivers entirely new ways of performing physical tasks. And when combined with the revolution in big data and advanced AI, these smart, collaborative robots are going to profoundly change how manufacturing gets done.

Breaking the Barriers to Widespread Automation of Physical Tasks

Today, more than 90% of physical tasks performed in manufacturing environments can’t be practically or economically automated. Why? Robots can’t adapt to the real-world variability in the workspace or operate effectively in semi-structured environments. Being agile enough to stop working on one task and shifting to another quickly and without requiring reprogramming extends beyond the capability of most existing automation. The list goes on. But advances in compliant motion control, integrated vision, extensible software platforms and advanced AI are tearing down these obstacles even as you read this post.

Much is being written about advances in AI. Some speculate on the arrival of malevolent robots that through conscious volition harm the human race. In truth, the opportunities over the next three, five and ten years are mundane by comparison but also much more practical.

Robots are now able to apply basic common sense to reduce the cognitive load of the user. Consider a robot picking parts out of an egg carton-type grid. If the robot learns that one of the parts has shifted and is now in a different location, it can infer that the other parts have shifted as well and can calculate the new locations without the intervention of a user. Robots are now able to sense the world around them and adapt on the fly to the changes typical in semi-structured, manufacturing environments.

The automation of cognition exponentially increases the scalability of learning across the enterprise – and ultimately inter-enterprise – as well. Cloud robotics leverages cloud computing, storage, and advanced analytics to coordinate the actions of large numbers of robots and allows one robot to benefit from the experiences of others. These advances replace the old model where robots are manually re-programmed one-at-a-time, increasing cost and risk and delaying the benefits of new knowledge.

The bottom line? Robots in the near future will gain knowledge from experience, learn from each other and leverage cognitive computation to make themselves, their processes and the products they produce better.

What does all this mean for manufacturing? Manufacturers recognize that they need to be more responsive to market changes, ready to deliver on customer preferences, and able to innovate faster and more efficiently. All adding up to the overwhelming demand for environments that are agile enough to meet all those needs.

Smart, collaborative robots will engender this agility. Factories will be smaller, and located more closely to markets and design centers, accelerating new product introduction and competitive advantage. Production lots of smaller sizes and mass customization will become economically viable, increasing customer loyalty and reducing risk. Companies will be able to retool their manufacturing systems to provide new roles for these mechanical “workers” as well as new roles for human workers.

I’d welcome your thoughts on what this new frontier in automation will mean to manufacturing and what it will take to seize the opportunity. You can reach me at @jim_lawton.

Robots and the Human Touch →