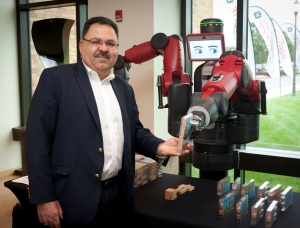 What companies come to mind when you think about continuous innovation? There are few more linked to the drive to innovate than GE [NYSE:GE] .

Staying ahead requires more than vision. Building out the technologies, processes, and strategies is critical to ensuring the success of any forward-looking effort. For GE, a lot of that work takes place at its Advanced Manufacturing and Software Technology Center outside of Detroit, Michigan. Here, Roland Menassa, the Center’s leader shares his perspectives on manufacturing and smart, collaborative robots.

You’ve been in the robotics industry for decades – what’s next for manufacturing robots?

I’m a big robotics-believer. Prior to joining GE, I was with GM and focused on the role of automation and robots in driving greater efficiency and productivity, in research and plant manager roles. With the rapidly evolving “New Robotics,” we recognized that we needed robots that were safe enough to work beside humans, could be easily trained to do tasks by their “colleagues” on the line and able to perform more than a single task.

Today’s innovation will change the model of where, how and why robots are deployed in exponential ways. I predict that soon production employees will get a robot when they are hired, just as we give engineers computers when they join. Like the computer, given to help the engineers do their job better, the robot will become part of the employee’s team: there to help them do their job better.

So, your vision is one where robots and people work as collaborative teams?

Absolutely. People are smart, they exercise judgment and they take direction. Today, we’re requiring that workers and tasks conform to dedicated, inflexible machinery. In the factories of the future, robots will be assistive tools – enabling, supporting, and enhancing the capabilities of highly skilled workers at many concurrent tasks. People will be able to respond rapidly to product line changes based on consumer demands, environmental regulations and changing market conditions, while producing customized, high-quality products.

These teams will adapt to lower-volume assembly methods and product mixes instead of being tied to a specific product line or method, making it possible to grow their share of the manufacturing sector globally.

What are some of the innovations making it possible to create these robot-human collaborative teams?

Manufacturing is very hard. When you break it down, you realize how much we take for granted what humans do and how challenging it is to build a robot that can emulate every action.

That said, there are several breakthroughs moving us forward. The first is that the “DNA” of collaborative robots is different. In this new category of robots, the arms are managed through force-control, as opposed to position control. So, they are safe to work alongside humans. More importantly, it opens up a whole new range of activities that use force-based capabilities. For example, in applications such as testing – whether printed circuit boards or safety belts— the robot “knows” how much force to apply to complete a task while achieving quality and reducing the likelihood of damage to the part or the fixture.

Second, these robots can be trained by colleagues. It’s amazing to watch a line operator show the robot what needs to be done and then watch the robot do it. This “train by demonstration” may be one of the most compelling selling points. Traditional robots, of course, had to be programmed by consultants and it would take months for that to happen – a production employee never got anywhere near the process. In my experience, when the robot is the interface, that’s when people engage and are ready to work with the robot.

Finally, we’re seeing robots that can perform much more dexterous operations. I was part of a team that worked with NASA on building Robonaut, and that was a big part of what we were after: force-sensing manipulation. There’s a lot more to come in this space, and it will center on developing robots that perform tasks in the same way humans do.

How are you preparing GE for the deployment of smart, collaborative robots?

Our environments are low-volume, high mix and so flexibility is key. Since 2013, we’ve been looking at ways to advance our automation strategies in these environments with the latest innovations in robotics technology.

We see immense potential for collaborative robots in GE’s businesses. Today, we have Baxter robots from Rethink Robotics in use or being evaluated in GE Healthcare, GE Power and Water and GE Energy. We are looking forward to deploying our first Sawyer later this year.

I find two things critical to adoption success. First, we’ve got to change how we think about the manufacturing process. In the old days, factories were built around the robots and everything was configured to work around that installation. Today, robots must perform in human-centric operations – integrated into work cells, able to be moved to where the work is done, and making it possible for people to do their jobs better.

Second, production teams have to be involved in the rollout. When line operators help identify how the robot will be used, train the robots, and work with the robots from day one, skepticism, fear and intimidation evaporate. More importantly, we get the improvements in productivity, efficiency and innovation we’re looking for much more quickly, as people focus on the work they are best suited to do and robots do the rest.

What will the role of robots be in GE’s Brilliant Factories?

We’re leading in the development of software solutions that make our products more efficient, easier to manage and maintain, and part of integrated environments. The collection and analysis of many, many terabytes of data from the hardware is absolutely part of that vision. That means doing so in our factories, and robots will be key in that process.

In the not-too-distant future, robots will help us manage that data to drive continuous process improvement, raise quality standards and more. That’s when we’ll see the true fulfillment of the promise of automation.

Roland’s vision is most definitely one of the most exciting ones in the industry today. More and more I’m reading and hearing about how manufacturers are moving toward a new model for robots and people working in collaboration as Roland sees it. What about you? What do you think the new workforce will look like and what are some of the ways robots can help people in manufacturing do their jobs better? Share your thoughts with me @jim_lawton.

← Why Robots AND Humans Are the Answer to Manufacturing’s Job Woes
On Your Marks: The Race to Global Manufacturing Leadership Is On →