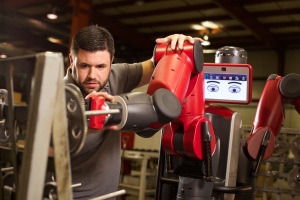 Is it just me, or has the pace of stories about the rise of robots and threats to jobs increased substantially in the past few months? NPR, The New York Times, bookshelves, both real and virtual, are crowded with commentaries about the impending arrival of smart robots able to do everything that we humans do and basically replacing us in the workplace.

Ok, so maybe, since I work for a robotics company, I take these stories a bit on the chin. I certainly am making a loud and clear disclaimer that I can’t speak to what smart, collaborative robots will be able to do in every single segment of human life.

What I can do is speak to the very real challenge that manufacturers face. Sure, everyone from the unions to the White House administration is looking to manufacturing to be the tide that lifts the US out of dismal unemployment numbers. For good reason. Many know about manufacturing’s multiplier effect: every $1 spent in final sales of manufactured products supports $1.33 in output from other sectors—or through a different lens—for every one job in manufacturing anywhere from 1.5 to three manufacturing-related jobs are created. Regardless of how the reach is measured, those are compelling statistics for putting people to work in manufacturing.

But here’s an inconvenient truth about jobs in manufacturing as it is today. A while back Forbes reported that there are 200,000 jobs left unfilled in manufacturing today. More recently, Deloitte reported that by 2025 there would be an estimated 2 million unfilled jobs in the sector. Behind the numbers is one reality: the manufacturing workforce in place today is aging out and one perception: the next generation of workers doesn’t want those jobs.

Manufacturers like Jabil recognize that the low-cost labor model that stretched supply chains around the world needs to be revisited. Manufacturing needs to be closer to the centers of design and innovation and closer to end markets. So factories of the future will be smaller, nearer to customers and operated by local talent. These operations will also rely more heavily on technology and as was recently noted in coverage by the BBC of a new center of manufacturing in Chicago, will need skilled workers, with certifications and a very different kind of education than what’s currently available in most high schools in the country.

So, here we are: more skilled jobs, with the inherent better wages, are coming on-line. But working in production has a negative profile for many.

Let’s face it. Tedious, repetitive work that’s mind-numbing for humans, like machine tending still has to get done. So do hundreds of other tasks in production that simply aren’t suited for humans to excel.

So let’s rethink the definition of work. It’s happening now as savvy companies recognize that unlocking the potential for sustainable innovation lies in an integrated workforce where humans and robots work side-by-side. In this model, robots do the highly repetitive, low-skilled work and humans then are able to take on the roles that make a difference to customers and to the bottom line. Jobs that require cognitive skills and creativity. Jobs that contribute to product innovation and competitive value. Jobs that keep manufacturers – and the ecosystem they support – growing, thriving and contributing to the economy.

Nicholas Carr was spot on in his NY Times piece positing that robots will always need humans. It’s time to focus on how humans can work with robots and stop worrying about jobs lost that no one wants.

← Factories of the Future: A Conversation With Jabil’s John Dulchinos
GE’s Roland Menassa: When Robots Help People Do Their Jobs Better, Manufacturing Wins →