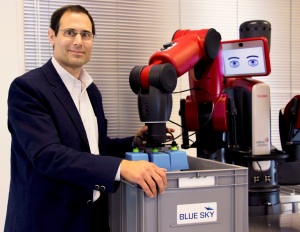 Recently, electronics manufacturer Jabil Circuit launched its Blue Sky Center, a state-of-the-art facility designed to help customers engineer growth in a world of change. Automation is a key component of the center – with programs to help customers with design-for-automation, as well as, share expertise in deploying flexible automation.

I was fortunate to be at the grand opening and heard some of the most visionary manufacturers in the world talk about how they are embracing the changes they see coming. Household names like Cisco, Tesla, and Honeywell, as well start-ups like Athos, and Tile, are working with Jabil to accelerate their strategies to optimize the factories of the future.

An aggressive strategy to deploy smart, collaborative robots is, according to John Dulchinos, Jabil’s vice president of digital manufacturing, “a key foundational element” for the company as part of its initiatives to advance operational excellence. I took advantage of the time to talk a bit more with John about his vision and what’s driving it.

Q: You’ve got a pretty clear vision for the factory of the future – can you sum it up for me?

A: At Jabil, we’re on a path toward factories that are more responsive, more flexible and more able to help our customers meet their customers’ needs. It’s likely to mean smaller operations, operations that can ramp up and scale back in much shorter timeframes and operations that are closer to the end market. And critical to all this – you’ll find at the heart – the ability to collect, analyze and use information – both from within the operation and outside.

Q: What do you see as the forces or catalysts behind this change in manufacturing?

A: There are a couple of significant trends occurring in manufacturing – especially electronics manufacturing and consumer goods.

First, there’s a move toward mass customization – consumers want products that are customized for them, and they don’t want to wait for very long to get it.

Second, product lifecycles are shrinking – we’ve got customers that ramp a product just for the holidays. While an extreme example, it illustrates why we’ve got to be able to build operations that can be reconfigured and ramped in extremely short time frames.

And finally, the model that’s served the industry so well for decades – locating in low-cost labor regions has reached its end. We’re seeing a greater demand for higher-skilled labor, driven by the reliance on digital and advanced technology, requiring that we rethink how we deploy automation in our operations.

Q: That’s a great segue – let’s talk about automation in the factory of the future. What does your vision for Jabil’s automation strategy include?

A: First, I have to confess – I’m a long-time robotics fan. I graduated from Rensselaer Polytechnic Institute, in the early 1980’s – when robots were all the rage. I’m very excited that we’re finally seeing the ideas we dreamed up then becoming reality.

First, these robots are able to not only work beside humans, but work with them. That means that they need to be trainable on the line, by the people who do the work. It also means they can work like humans do –that means intuitively, undaunted by variability and able to change from task to task with little downtime.

Second, these robots are easy-to-deploy and fast to ramp. In the new world of continuous reconfiguration of lines, and processes, we have to able to change what the robots do as quickly as we change the production lines.

Third, and critical in the flexible environments that are the hallmark of the factory of the future, these robots must be able to perform increasingly sophisticated tasks. This means that robots will have greater ranges of motion, be able to work with fixtures small enough for human fingers and require more than one step for completion.

Q: So where do you see smart, collaborative robots taking Jabil in the future?

A: I’m excited about what we’re seeing today—we’ve come a very long way in the applications. What’s next though is what I really am passionate about. Think about it – every robot we deploy is a computer. That means, going back to what I said earlier about the role of data in production environments, is that these robots will become critical in that model. Robots will be information management systems that can collect and analyze data on the floor, in real-time and make it available for interpretation.

That represents a real break-through in manufacturing allowing us to not only see what is happening now, but able to apply predictive technologies to the information. Everything from when a machine needs to be serviced to when a process needs to be adjusted will become available to us.

With that ability, we’ll no longer be simply looking at the past, but able to see ahead – a significantly more powerful tool for increasing efficiency and productivity. More compelling though, may in fact be the contribution that it makes toward accelerating innovation and creativity.
There you have it. Perspective on the evolution of manufacturing and the role that robots are playing in it today, and where robots may play tomorrow, from someone living it every day. What do you think the factory of the future will entail, and what role do you see for collaborative robots? Share your thoughts with me @jim_lawton.